And the colours fade to grey: What is coral bleaching? 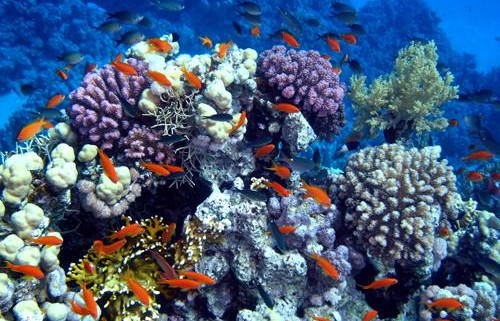 Hermatypic corals may look like lifeless rocks but they are really living creatures which belong to the animal phylum Cnidaria, together with jellyfish and sea anemones. Many members of the Cnidaria have tentacles equipped with specialised stinging cells that contain venom. These are used for self-defence and to prey on small fish and crustaceans. Hermatypic corals, however, have no stinging cells; they defend themselves with a rock-like, calcareous exoskeleton that is slowly deposited over years. Nor are they predators, instead they live in association with photosynthetic plankton from the genus Symbiodinium, often called zooxanthellae, and the photosynthetic pigments of these unicellular algae give corals their bright colours! Members of the Symbiodinium belong to the Dinoflagellates, a group only very distantly related to land plants and green algae. They are endosymbiotic, meaning they are completely engulfed by the coral’s plasma membrane and live inside their cells. The coral provides the algae with a protected environment and a number of nutrients, like ammonium and phosphate, which it filters out of the water. In return, the Dinoflagellates fix CO2 dissolved in the water to provide the coral with sugar. 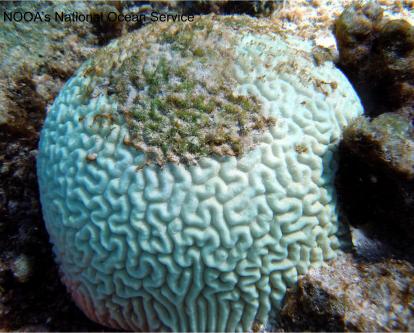 Not what you normally mean when you say your brain needs bleaching. Brain coral with all the symbiotic algae expelled.

Coral reefs are found in tropical oceans, usually only few kilometres off the coast or on sand banks where the ocean is still shallow enough for light to reach the photosynthetic corals at the ground. They are globally rare, covering only about 0.1% of ocean surface but are the habitat of over a quarter of all known marine species! Their incredible biodiversity make coral reefs a valuable resource. Millions of people depend on the reefs as rich fishing grounds. Additionally, reefs physically protect the coastline form incoming waves and prevent erosion. The great reefs of Australia, Florida and the Caribbean yearly attract hundreds of thousands of tourists. When considering their social and economic importance, ecologists speak of ‘ecosystem services’ provided by coral reefs and it turns out their monetary value is immense!

It is thus very concerning that we have seen an immense decline of coral reefs over the last decades. The Caribbean for example has suffered an 80% loss of their coral populations over the last thirty years! The underlying phenomenon known as coral bleaching is a process during which the usually so beautifully coloured corals expel their symbiotic algae causing them to turn white and die. The picture shows a bleached, white coral in the foreground and a healthy coral in the background. Coral bleaching is associated with high peak water temperatures and increasing water acidity, both of which are a direct consequence of rising CO2 levels in the atmosphere.

A group from the University of Georgia recently published new detailed insights into the bleaching process. The research team was able to observe a bleaching event as it was happening at a reef off the coast of Mexico. Their key findings, published in the Journal of Limnology and Oceanography, shows how coral/algae populations can adapt to changes and sometimes even recover from bleaching events. There are many different species of endosymbiotic Dinoflagellates, classified into 9 major clades, and it turns out some of them are more resistant to high temperatures than others. Single corals often host three different algae species at once and their relative abundance determines the temperature tolerance. Furthermore, bleached corals do not die immediately; they can be repopulated and their new composition of Dinoflagellate species is significantly different to their pre-bleached one.

The symbiotic relationship between corals and Symbiodinium is an active area of research. The hope is that through a deepened understanding, we might find ways to protect reefs from bleaching and dying.

By Stephan Kamrad, University of Cambridge

Rise of the Killer Mushrooms