Between now and 2050, global population levels will increase by 2 billion: it is estimated that food production will have to increase by 70% just to maintain current nutrition levels, which, for many people around the world, are currently far from sufficient. 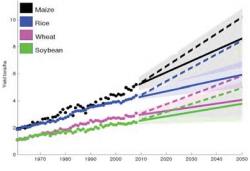 Not only will food production have to increase, but it will have to do so in the wake of serious climate change. Global warming, and increasing numbers of extreme weather events like the recent hurricane Patricia, have the capacity to devastate crop yields the world over.

In response to these threats, scientists all over the world are looking into ways in which photosynthesis can be improved to increase crop yields. A difficult task, but one, which, if successful, could alter the face of the planet.

Photosynthetic Efficiency Is Limited By the Failings of Rubisco:

Photosynthesis converts light energy from the sun to the chemical energy necessary to catalyse fixation of atmospheric CO2 into sugars for growth. This fixation is catalysed by an enzyme Rubisco, the most abundant enzyme on the planet. 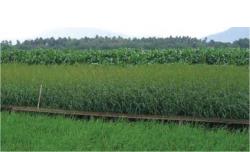 Rubisco also catalyses a reaction involving O2: called the “oxygenase” reaction, it is highly wasteful and leads to no fixation of carbon. Even worse it causes serious damage to Rubisco and the plant, massively impacting photosynthetic productivity.

In response, many organisms have evolved means to artificially raise the levels of CO2 around Rubisco. This minimises the extent of the oxygenase reaction. These are called “carbon concentrating mechanisms” or CCMs for short and are found in a wide variety of different photosynthetic organisms.

Land plants like maize or wheat, employ a “biochemical” CCM, which involves the fixation of CO2 into an organic acid before decarboxylation and fixation by Rubisco. Others, like algae, employ a “biophysical” CCM: they package all of their Rubisco into a tiny spherical structure in the middle of the chloroplast, known as a pyrenoid. This, as well as specific delivery of CO2 allows Rubisco to operate in a near oxygen free zone. The two systems bear many similarities, and are thought to represent examples of convergent evolution.

Whilst some crop species possess CCMs, many, like rice, have not evolved these complex pathways. Because of this, there has been considerable interest in genetically manipulating these crops to produce CCMs and super charging photosynthesis. Some has looked to maize and wheat for inspiration, whilst others are trying to mimic the way in which Rubisco aggregates into the pyrenoid, as seen in algae. 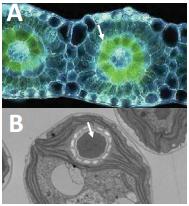 Given the different ways in which photosynthesis could be improved, the question remains: which one ultimately offers the greatest benefit? Which has the greatest chance of success? And how do these benefits compare to engineering plants for other traits, like increased drought or salinity tolerance? The answers to these questions are vital if the potential of these bioengineering efforts are to be realised.

By Charlie Whittaker, John Innes Centre. Based on the work of Professor Julian Hibberd’s and Professor Howard Griffiths’s Groups, University of Cambridge.

The website for “Combining Algal and Plant Photosynthesis” who are looking to engineer the algal CCM into plants.
The website for the C4 rice project, which looks to super charge rice photosynthesis through introduction of the C4 photosynthetic pathway.
A more in-depth look at the oxygenase reaction and some of the biochemical CCMs that have evolved to overcome its limitations.
Infographic highlighting the changes to our food system needed to feed an ever-growing population.

A Bird’s Eye View of the Forest: Lasers, Drones and the Changing Landscape...