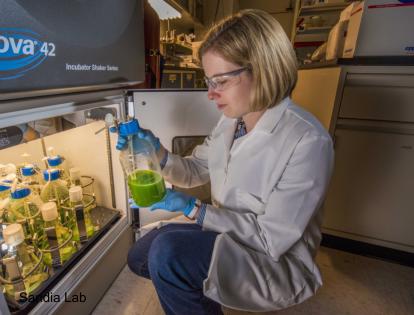 A recent breakthrough at the Scripps Institution of Oceanography has provided a way to increase the production of valuable fat molecules in algal biofuel production. These lipid oils are necessary for fuel production. However, they are only produced by algae in nutrient starved conditions. Previously, this had limited algal growth and, as such, prevented significant lipid accumulation.

Dr. Emily Trentacost and her team were able to genetically target lipases, the molecules responsible for fat breakdown, and limit their activity. As a result, algae grown in high nutrient conditions began producing significant quantities of lipids. Algal growth no longer has to be compromised to obtain the fats needed for biofuels.

Not only does this development lower the cost of biofuel production, but techniques used in the process have now been adapted to increase the speed of biofuel production. While it’s still a long way before algal biofuels are competitive in price to gasoline, this breakthrough is only one in a line of recent discoveries that are improving their yield and cost effectiveness. It seems like the sky might be the limit for algal biofuels!