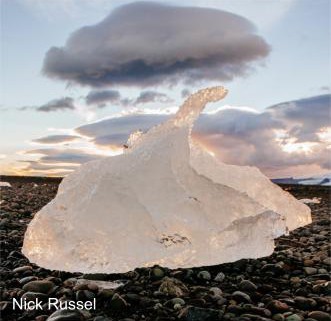 Energy and fossil fuel use are the main culprits that we need to fix. The way to fix it is to use less energy and materials, and produce energy renewably.

But even if we completely fix the energy system to have 100% renewable energy, we’ll still have a major problem – food production.

The emissions for producing food alone could be enough to cause 1.5C warming from now on. If we’re going to meet the Paris Agreement targets, we need to change the food production system from the current trajectory.

This project starter is based on the work of Dr Bojana Bajzelj of the University of Cambridge and WRAP. 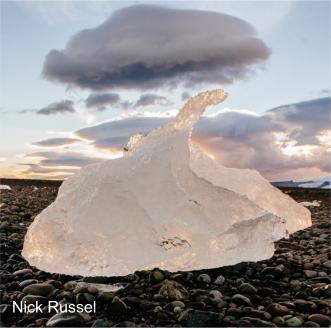 A fragment of melted icecap washed up on the shore of Iceland. 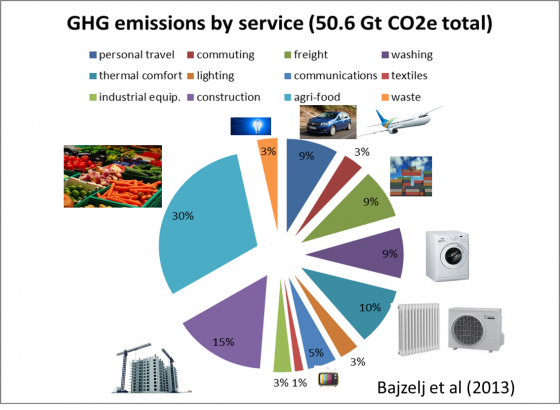 In the future, researchers predict there will be many more people – potentially a global population of 9.6 billion by 2050. The 20th century saw huge increases in crop yields, but these may not continue to the 21st century. A richer world will be eating more meat, and that means more cows. And, believe it or not, cows and other ruminants are a major emitter of methane – via their burps.

So what’s behind this? And what can we do about it?

If we break down the food related emissions, we can see 10 key areas, given in the table above. Two of these are particularly serious from the point of view of greenhouse gas emission – livestock burping methane, and deforestation to make space for agriculture.

How can we address these areas?

We can look at renewable energy, which can cut emissions related to cooking, storing, transporting, manufacture, and – potentially if not now – agricultural machinery and fertiliser production.

We can improve crop yields – so that we can produce more crops using less land. This would have huge potential benefits if we used this to cut down on deforestation, a particularly serious issue. But increasing crop yields would probably increase the use of fertiliser, meaning the benefits aren’t as big as they could be.

We can change what we eat – cutting down on the amount of meat that we eat, particularly red meat, and replacing it with a plant-based diet. Of course, many people in the world already eat much less meat than we do in the West, but aspirations to a western meat-rich diet are high in parts of the world that are growing rapidly richer. A varied and plant-rich diet is healthy, and with obesity a growing problem, that’s a major benefit.

If we use renewable energy, reduce food waste, improve yields, and change what we eat – then researchers predict that we will be able to bring down our greenhouse gas emissions from food. The following table sets out the predicted GHG emissions of the various potential actions we can take.  Our target is to reach less than 8 units, from our predicted future emissions of 24 units.

Researchers argue that in the future, we will mostly need to eat healthy plants

That’s plants that are themselves in good health, that can withstand pressures from climate change, resist pests and crop diseases, and with a high yield.

At the same time, we need to eat plants that are good for our health, that have all the nutrients and micronutrients we need.

And we mustn’t forget taste. If these healthy plant-based foods don’t taste good, people will be quick to fall back on their old, meat-rich diets.

This could be the start of a range of types of project.