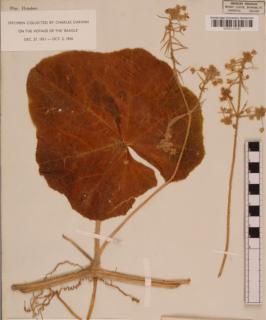 In the hidden halls and secret passageways of more than 3000 herbaria world-wide, there are millions of pressed, dried, plant specimens, labelled and stuck on to sheets of paper. They preserve a 300 year biological timeline of plant life and its global diversity. We even have the the very leaves that Charles Darwin picked on the voyage of the Beagle.

These ancient specimens are a secret weapon in tackling famine, climate change and loss of biodiversity.

And because many of them are digitised, these amazing records are now available for anyone to view. 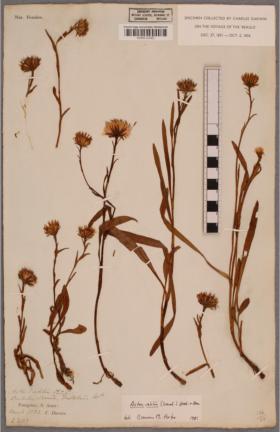 Specimen of Agoseris coronopifolia (member of the Asteraceae, daisy, family) collected by Darwin on the Beagle voyage and showing examples of  variation between plants.

Let’s back-track to 1840s Ireland where the entire potato crop has perished. One million men, women and children, reliant on the potato as their staple food, have starved to death. A further million people have fled the country.

Concerned researchers across Europe, trying to understand why this has happened, press and dry plant material infected with the blight pathogen Phytophthora infestans and carefully preserve it on herbarium sheets. They cannot know that their specimens will be used 170 years later… 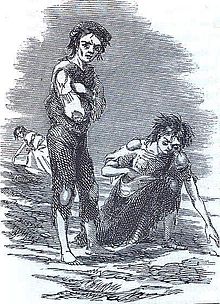 Scene at Skibbereen during the Great Famine

But in 2014, DNA of Phytophthora infestans was extracted from 39 of those nineteenth-century herbarium samples. Thanks to new developments in DNA sequencing technology, it was possible to reconstruct the entire genome of the pathogen from herbarium specimens and answer a number of current questions about the population biology of the Phytophthora infestans pathogen. (Read the original research paper)

Herbarium specimens are crucial to our modern understanding of biology – as a physical record of the plants that scientists study, a way of permanently connecting their research with the plants they use in their experiments.

Under optimum conditions a herbarium specimen should last for many hundreds of years. The oldest specimen at Cambridge University Herbarium is dated 1703.

On the voyage of The Beagle (1831 -1836) Charles Darwin collected tomato plants from the Galapagos Islands. These plants are preserved as herbarium specimens at Cambridge University Herbarium. The tomatoes are tiny and not at all like our much-bred, larger, modern fruits.

The same team of scientists who extracted Phytophthora infestans DNA from herbarium specimens have now turned their expertise to Darwin’s preserved tomatoes and will compare their molecular structure with living tomato plant material growing in the same places from which Darwin collected his specimens.

Darwin also collected on Galapagos a plant called Sicyos villosa. This member of the Cucurbitaceae family (which includes squashes and cucumbers), is now world extinct. Known only from Darwin’s single specimen, just one large leaf and a few seeds, it too is preserved at Cambridge. (See Darwin’s specimen online) 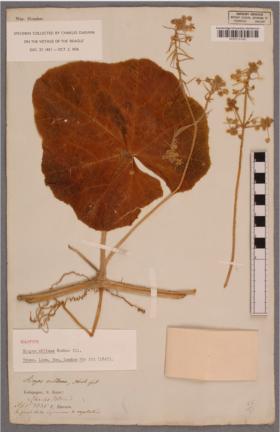 Davwin’s specimen of the extinct plant Sicyos villosa, gathered on the Beagle voyage

Some of this plant’s close living relatives are also dying out. Sicyos australis, for example, now only grows on the smaller islands around New Zealand where domestic squashes and cucumbers, with the viruses that infect them, have not been introduced.

In years to come we may be able to gain more knowledge about the extinction of Sicyos villosa by exploring DNA from the single preserved leaf. At the moment this would mean taking a 2cm square from the leaf, a bit sad when it is the very last one of its kind.

Because herbarium specimens are the real thing, rather than photographs, we are able to examine their cell structures alongside their DNA.

This means that herbarium specimens can be used to study the evolution of plant breeding systems and the interactions between plants and insects such as bees. For example, bees prefer to visit flowers with conical cells on their petals – it gives their feet something to grip on to.

A current PhD project in Prof. Beverley Glover’s lab aims to increase understanding of how plants evolve to improve pollinator activity by investigating the morphology (the structural features) of the anthers of Solanum, a large and diverse plant genus which includes commercially important crop plants. Anthers from hundreds of herbarium specimens and from living material are measured, DNA sampled, and coated with gold for scanning electron microscopy to see how cell structure may be evolving.

So now let’s fast-forward to the year 2166. Your legacy of hundreds of publications from a lifetime’s research in plant science still survives. If you made herbarium specimens, 22nd-century researchers can read your papers, visit the herbarium and see exactly what plants you used, and then accurately repeat your experiments. They can collect more data on the species that you studied from where you gathered the material. If, that is, climate change has not wiped out the plant population you studied.

Herbaria can inform no end of climate change studies. For example we know from looking at our specimens in Cambridge University Herbarium that some plants are flowering earlier than they were even only 30 years ago. Also at Cambridge we have several thousand plants collected and dried before the Industrial Revolution in 18th century Europe. Study of their stomata in comparison with the stomata of the same species today reveals changes to their numbers in response to climate change and air pollution.

This could be the start of a project on a range of topics, from an artistic response to Darwin’s specimens to a scientific investigation into the changing morphology (appearance) of a common species over time.

Cambridge is fortunate to have a large university herbarium with over a million specimens. But many other universities and museums, even small museums, have collections that could help with your research. They are great places to visit.

To find your nearest see Index Herbariorum and type in your town and country. Individual entries give addresses, plant specialisms and the name of who to contact.

Many herbaria can be searched online but it is unusual for entire collections to be available. Kew, for example, has around 7 million specimens but only half a million are imaged so it is best to arrange to visit a herbarium or contact them with your query if you don’t find what you need online. Some major online herbaria can be found at

The raspberry destroying an ecosystem