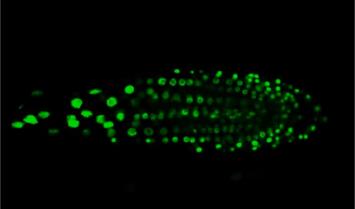 GFP, or Green Fluorescent Protein, is a protein which, as its name suggests, fluoresces bright green under UV light. First isolated from a species of jellyfish, it has since been used for many different applications.

GFP is often used to report the expression of specific genes. This involves introducing the GFP gene into a host organism’s own DNA. When combined with an existing gene and its promoter, GFP allows scientists to visualise the locations of particular gene products inside cells. Such insights into gene expression have proven fascinating in many areas of biology, and have helped to deduce how organisms regulate their gene expression throughout their lives and in response to different external influences.

In this video, the host is the plant species Arabidopsis thaliana, a plant which is commonly used by researchers to investigate many different aspects of plant biology. It has a relatively small genome of around 25,000 genes, which makes it perfect for use in genome analysis studies.

As the root in this video grows, spot the GFP-marked chromosomes dividing as cells undergo the metaphase stage of mitosis.

By Amy Newman, University of Bristol