Size matters… when you’re a leaf 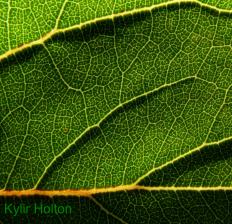 A new study suggests small leaves are more resistant to drought due to closer compaction of their veins, solving a long-standing mystery as to why plants in dry environments have smaller leaves while those in wet ones are bigger.

If you have ever been to a tropical greenhouse you’ll have likely encountered plants with enormous over-sized leaves, far bigger than anything that naturally occurs in the drier environments of our back gardens. The observation that plants growing in dry, more exposed habitats tend to have smaller leaves is one of the most well documented biogeographical trends in plant science. Indeed, it was first described by Theophrastus in Ancient Greece, and has been discussed by explorers and scientists ever since. Despite this trend being so striking, scientists have never really understood why it occurs.

New research findings from a team of UCLA scientists offers for the first time, a direct and simple explanation for the global patterns seen in leaf size. By scaling a large variety of leaf traits against leaf size for over 450 globally distributed species, the researchers quickly noticed that one feature in particular, how closely packed leaf veins were (vein density), consistently correlated with leaf size. As leaves get smaller, the largest and most visible veins (the “major veins”) become more closely spaced together.

Professor of ecology and evolutionary biology at UCLA, Lawren Sack, who headed up the research, encourages everyone to go out, pick up different sized leaves and see this phenomenon for themselves.

It may seem like an obvious observation, but until now no functional link has been made between leaf vein density, leaf size and the environment in which a plant lives. The researchers suggested that close packing of the major veins in small leaves allows for better transport of water through the leaf, which aids survival in dry conditions.

In plants, veins are essential for the transport of water from the roots through the stem and to the leaves. At the leaf surface are tiny pores known as stomata which open to obtain carbon dioxide (CO2) for photosynthesis. Just like we need food to grow, plants need carbon which they get from atmospheric CO2. When plants open their stomata however, water is lost by evaporation and must be replaced by that from lower down in the plant and soil. As water evaporates, more is pulled from the leaf veins, which in turn pulls more from the large water pipes of the stem – called xylem, which pulls water up from the soil via the roots. In this way, leaf veins are crucial in maintaining the continuity of the “pipe delivery system” from the central waterworks of the plant to the leaf surface, allowing stomatal pores to remain open and continue eating up CO2. Without this supply of water to the stomata they would close to prevent further water loss, reducing the amount of food the plant can get and disrupting the long-distance pull of water through the plant, eventually causing the leaf to wilt and die.

Superhighways in the veins

So does how the packing of veins within the leaf determine the environment to which a plant is suited?

Well firstly, the veins within a leaf vary in size and number; when you hold a leaf up to a light the first three “orders” of veins are clearly visible to the naked eye, these are the ‘major veins’ (Fig2). Any veins smaller than this are the minor veins which give rise to the mesh like pattern often observed on the underside of a leaf.

Sack and colleagues found that major vein density correlated with leaf size; major veins were more closely spaced together in small leaves and further apart in larger leaves. Minor veins on the other hand were not found to correlate with leaf size.

The researchers suggested that a higher density of the major veins protects the leaves from ‘embolisms’, small air bubbles which block the vein when water is scarce. Being larger in width and length, the major veins transport water more efficiently through the leaf and can be thought of as “superhighways” for water transport. Minor veins on the other hand are comparable to city roads, allowing water to reach all areas of the leaf but transporting it much more slowly.

If an embolism occurs on a superhighway it would be expected to cause major disruption to the flow of water, which must find an alternative route through the leaf. The closer another superhighway is the quicker water can re-route round the blockage and avoid spending too much time on the slower city roads.

To test this idea, the researchers constructed a computer model of leaves of different sizes with various
vein structures and simulated the effect of embolisms on water transport efficiency. They confirmed that
blocking of the major veins had a big impact on water flow through the leaf but that this could be rescued by addition of more major veins. Blockage of minor veins of the other hand had little effect at all. In environments where there is surplus water, such as the tropical rainforest, there is a decreased risk of major vein blockage such that leaves can grow to large sizes and benefit from an increased leaf area for photosynthesis.

This discovery is particularly exciting for paleobiologists trying to re-construct past climates. Fossil leaf
size is often used to make predictions about the climate in which a plant would have lived. However, this relies on fossilized leaves being whole, which is often not the case, especially for larger leaves. It is possible though to obtain vein density information from just a portion of leaf, allowing scientists to now make predictions using just fossilised leaf fragments alone, of which there is a much greater abundance.