Unlocking the Potential of Algae: How the Green Stuff in Your Pond Might Go On to Save the World.

Algae Are One of the Most Diverse Groups of Organisms on the Planet:

Algae are the invisible, unsung heroes of the global carbon cycle. Responsible for over half of the carbon dioxide fixed globally, these photosynthetic organisms represent an incredibly diverse group, ranging in size from Prochlorococcus, a single celled alga smaller than most bacteria, to the highly complex and multicellular seaweeds that form dense forests under the ocean.

Algae inhabit almost every aquatic environment on the planet, and are found everywhere from Arctic snow to sewage. This capacity to thrive in challenging environments, as well as their rapid growth rate and ability to produce exotic compounds has excited much interest, and now scientists are looking to exploit the potential contained within these tiny cells.

Algae have been incorporated into electrical circuits to generate “biophotovoltaic devices”. These siphon off power from photosynthesis, in doing so, allowing the light absorbed by the alga to be used to produce an electric current, the kind of which may one day power everything from streetlamps to your TV. Kind of like a living solar panel.

Others have made use of the fact that many algae can produce a wide range of industrially important products. For example, many algae accumulate high levels of compounds called fatty acids. These are a highly diverse set of molecules, ranging from the omega fatty acids found in fish oils, to tri-acyl glycerol (TAG), a precursor to biofuels which can be used as fuel for cars. In Brazil alone, these biofuels power over 13 million vehicles, massively reducing the country’s CO2 emissions.

These abilities can be greatly enhanced by genetic modification. Scientists are currently exploring the possibility of increasing the amount of TAG algal cells can accumulate, or promoting production of unusual fatty acids (like omega-3s, which have been shown to be good for cardiovascular heath). It can even facilitate the construction of entirely new metabolic pathways in vivo to produce algae capable of making pharmaceutically relevant compounds.

Exploration of Algae Lies at the Forefront of Cutting Edge Science:

The ways in which all of this is being achieved stands at the very cutting edge of science in the 21st century: synthetic biology approaches are being used to make algae containing new combinations of genes to introduce novel biochemical features into algae.

Nanotechnological methods are being utilised to make ultra-small-scale electric devices to test algal strains for their electrogenic ability. And scientists are currently scouring the globe searching for new and exotic strains with never before seen biochemical properties, like Chlamydomonas nivalis, “snow algae” which produces highly complex antioxidants thought to possess anti-cancer properties. 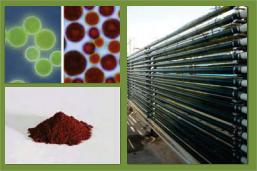 All of these efforts aim to realise the potential contained in these tiny creatures. Potential that, if realised, will fundamentally alter the world we live in.

By Charlie Whittaker, John Innes Centre. Based on the work of Professor Alison Smith and Professor Chris Howe’s Groups at the University of Cambridge.